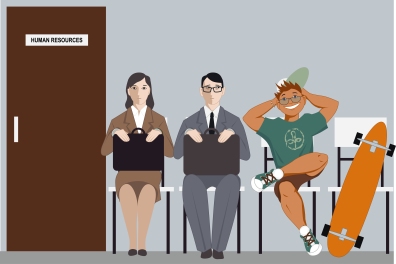 An investigation was launched at a large metal commodities company:  a young man, who was promoted to ‘team leader’, did not arrive on the next day transformed into a suit wearing, KPI demanding psychopathic police enforcer, as was normally the case.

By 1100 in the morning the global supply of metal commodities had ground to a halt!

Employee Nigel Smith said: “Honestly I have never seen anything like it.  We expect the highest standards of conformance from our managers.  I felt very uncomfortable not being told what to do, and not being faced with a dull grey robot of a man”.

The young manager was immediately sent home while things were investigated by the internal ‘Ethics & Compliance Judgement Squad’.  Their report uncovered the fact that there was actually no written rule about dress code.

The board has now enforced a strict dress code and written a 200 page policy document defining ‘culture’ as a set of expected behaviours and the grave consequences of deviation.

The man has since left the company and has launched a disruptive challenger to her former employer.

www.managing-spaghetti.com.  This is satire; nothing here is true.